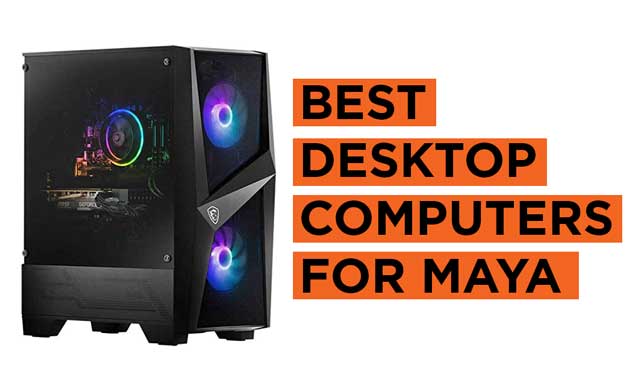 Here, we’ll look at the Best Desktop Computers for Maya 3D. This programs, is one of the widely used animation, simulation, VFX and rendering software in the 3D modeling industry. In order to run optimally, Autodesk 3D Maya has to be used on a powerful desktop pc. The desktop computers listed here, come with at least an Intel Core i7/ Ryzen 7 processor. These CPUs enables you to work with complex models with thousands of polygons without running into performance issues such as freezes and low frame rates.

As far as the GPU goes, the desktop pcs listed here, have at least 4GB VRAM Nvidia/AMD dedicated graphics card. This offsets some of the workload from the CPU. To add to that, it also cuts down on the time it takes to render your designs. When it comes to the RAM, these desktop computers come with at least 16GB. This enables you to run other programs in the background and not have performance when switching between them. This Maya 3D capable Desktop Computers can also handle other animation, modeling and 3D software such as ZBrush, Blender, Maxwell and Cinema 4D.

These are the Best Desktop Computers for Autodesk Maya 3D (2021):