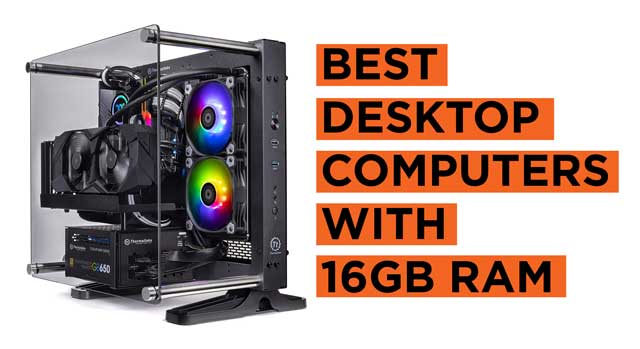 As programs and software become more powerful, so does the hardware requirements. Today, we’ll look at the Best 16GB RAM Desktop Computers that you can buy. With 16GB of RAM, you can run multiple apps at the same time, without having performance issues.

An advantage of large RAM, is the fact that your PC load programs faster, and is generally more responsive.  RAM hogs such as Google Chrome, perform seamlessly, even with other programs running in the background.

More features that have been taken into account in this list, include a large storage capacity, High Performance processor, in addition to good design and build quality.

This list of Best Desktop PCs with 16GB RAM, has information on the key specifications and features. I have also listed the advantages and disadvantages to help you make an informed decision. You’ll find computers form brands such as Asus, Acer, HP, Lenovo, Dell, Mac in addition to Microsoft. You can also take a look at the Best Desktop Computers with 32GB RAM, in addition to the Best PCs with 64GB RAM.

The Following are the Best Desktop Computers with 16GB RAM (2022):